Classic FM Chart: The Ultimate Classic FM Album enters the chart at no. 2 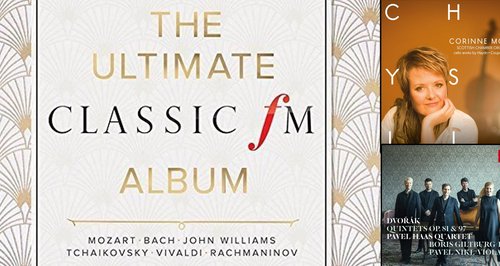 While Einaudi’s Islands remains at no. 1, the latest release from Classic FM’s own label, The Ultimate Classic FM Album, has entered the chart at no. 2. Symphonic Amadeus is a non-mover at no. 3, while there are two further new entries in the top ten this week - Dvorak Quintets by Boris Giltburg and the Pavel Haas Quartet at no. 4 and Corinne Morris’s Chrysalis at no 6.

The rest of the top half of the chart remains mostly the same as last week, with Howard Shore’s score for The Lord of the Rings Trilogy as the highest climber, up five places to no. 11. There is also the addition of Spiderman: Homecoming, Poulenc with the Sixteen and Harry Christophers, and Karl Jenkins’ The Armed Man: A Mass for Peace re-entering the chart just outside the top half.

The Ayoub Sisters’ debut album has re-entered at no. 26, with a final new entry in the lower third of the Classic FM Chart at no. 29 - The Very Best of Jacqueline Du Pre. This week’s biggest faller is Alistair McGowan’s The Piano Album, down twenty-two places from no. 6 to no. 28.