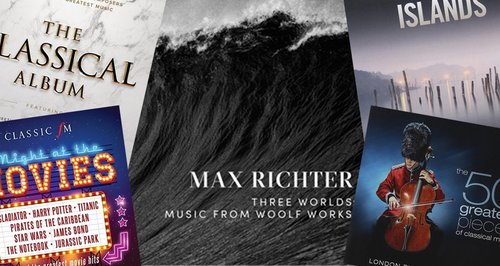 19th February: The top three albums in the Classic FM Chart has remained the same for three weeks now, plus to add the the resilience, no. 4 is also a non-mover this week.

Two weeks ago, Max Richter's new album Three Worlds entered the chart at no. 1. For the third week running it is still holding the top spot, while both Einaudi's Islands and The Classical Album are also non-movers at no. 2 and no. 3 for the third week in a row. The 50 Greatest Pieces of Classical Music by the London Philharmonic Orchestra, which climbed to no. 4 last week, is also a non-mover this week.

The rest of the chart it is a game of two extremes - pieces either moved one or two places, or jumped around dramatically. This is reflected in the rest of the top 10, which includes eight albums the same as last week, as well as our top four non-movers.

One of the new additions to the top 10 is Classic FM: A Night at the Movies, which jumped a staggering 19 places last week and climbs a further 5 places this week to no. 6.

Jonathan Antoine's Believe is on a rollercoaster ride in the Classic FM Chart. It is the second new addition to the top 10 as well as being this week's highest climber, rising 15 places from no. 24 to no. 9. Strangely enough, this album was last week's biggest faller, dropping from no. 4 to no. 24, and the week before that it was a new entry. It is encouraging to see albums are constantly regaining popularity, yet nothing is guaranteed.

Elsewhere in the chart, this week's largest faller is Bach: Cantatas with Iestyn Davies, which drops 12 places from the middle of the chart to just inside the top 30. All new entries and re-entries feature in the lower half of the chart this week, including new albums from Henning Kraggerud with the Malmö Symphony Orchestra and Virgin & Child: Music from the Baldwin Partbooks II, and five re-entries from Max Richter, Alfie Boe, John Williams: Greatest Hits 1969-1999, London Symphony Orchestra and 100 Hits: Relaxing Classics.