Classic FM Chart: Sheku Kanneh-Mason's 'Inspiration' climbs back up to no. 1 alongside several new entries 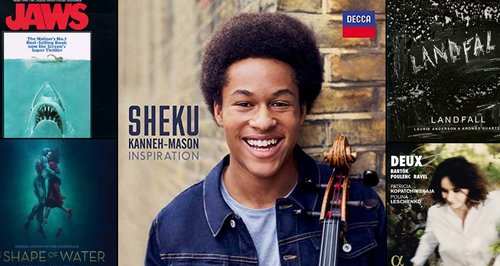 Sheku Kanneh-Mason clinches back the top spot from Andre Rieu this week, taking Inspiration to its third week at no. 1. Amore by Andre Rieu falls back down to no. 2, while Laurie Anderson and the Kronos Quartet enter the Classic FM Chart at no. 3 with Landfall. Einaudi's Islands continues its seemingly never-ending streak in the chart at no. 4 and is accompanied by another two new entries - Alexandre Desplat's soundtrack for The Shape of Water at no. 4 plus music from Bartok, Poulenc and Ravel by Deux at no. 5.

Steve Reich is this week's highest climber, sitting in the middle of the chart at no. 14 having climbed up sixteen places from no. 30. It is joint by a John Williams favourite, Jaws, making it's (surprising) first appearance in the Classic FM Chart.

In the lower third of the chart, the Leipzig Gewandhaus Orchester is the fifth new entry of the week at no. 20, while Music for Mindfulness is this week's biggest faller just behind it, dropping from no. 6 to no. 22. Hans Zimmer's score for Dunkirk is the only re-entry this week at no. 26, with our sixth and final new entry entering at no. 30 - the Chiaroscuro Quartet playing Haydn.