Classic FM Chart: 'One Voice: Believe: by Aled Jones at no. 1 for the third consecutive week 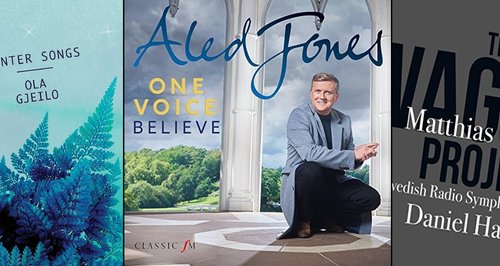 Aled Jones’s One Voice: Believe has held onto the no. 1 spot for the third week in a row since it entered the Classic FM Chart. Einaudi’s Islands also holds on to it’s place at no. 2, while André Rieu’s Best of Christmas rose to no. 3. John Suchet’s Album of the Week, Ola Gjeilo’s Winter Songs, has entered the chart at no. 4 and Karl Jenkins’s Symphonic Adiemus is this week's highest climber, rising nine places from no. 14 to no. 5. Carols from Kings is another high climber, having come from no. 15 to no. 7, however the soundtrack to Justice League has fallen six places down to no. 10 after entering at no. 4 last week.

Outside the top ten, after entering the chart last week at no. 3 Dolce Duello by Cecilia Bartoli and Sol Gabetta has dropped ten places down to no. 13, making it this week’s biggest faller. Elsewhere in the chart, there are several re-entries, including Score by 2Cellos at no. 19, Hans Zimmer’s soundtrack for Gladiator at no. 21, plus Magic of the Movies by André Rieu, Essential Carols, Music for Mindfulness, the Home Alone soundtrack and one further new entry, The Wagner Project, which entered at no. 30.