Classic FM Chart: 'Music for Mindfulness' knocks Einaudi from the no. 1 spot 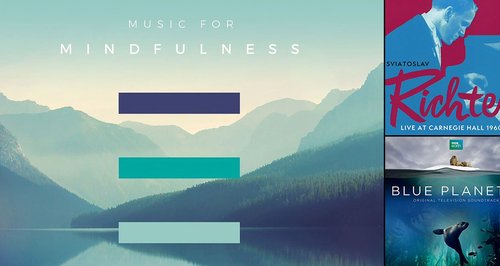 Music for Mindfulness has taken the top spot from Einaudi, whose album Islands has dropped down one place to no. 2. There’s a new entry at no. 4, Live at the Carnegie Hall with Sviatoslav Richter, and Kristin Zimerman playing Schubert’s Piano Sonatas is up ten places from no. 15 to no. 5. No. 6 is a further new entry, this time from Hans Zimmer with his score for Blue Planet II followed by this week’s highest climber - The Very Best of Jacqueline Du Pre up twenty-two places from no. 29 to no. 7. Just inside the top ten is a re-entry from Classic FM presenter Aled Jones with One Voice at Christmas at no. 8, plus two further new entries featuring the music of Vaughan Williams at no. 9 and English composer Roger Sacheverell Coke at no. 10.

There are two further new entries in the lower third of the chart, bringing this week’s total to eight, featuring the music of Tchaikovsky and Mozart. At no. 28 Carly Paoli re-enters the chart with Singing My Dreams and at no. 29 Andre Rieu re-enters the chart with December Lights. Finally, Dvorak’s quintet’s is the biggest faller this week, down twenty-six places from no. 4 to no. 30.