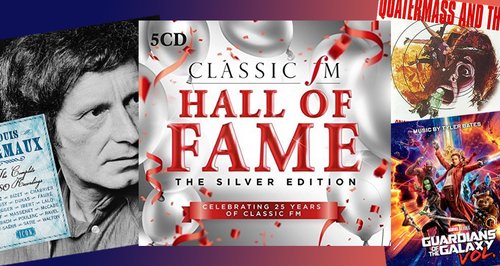 30th April 2017: ‘Classic FM Hall of Fame: The Silver Edition’ entered the chart last week at no. 1 and has managed to hold onto the top spot for a second week. ‘Jubilate: 500 Years of Cathedral Music’, another release on the Classic FM label, spends its 5th week in the top 5.

There is plenty of movement in this week’s Classic FM Chart, apart from at the top of the chart, where the top 4 albums remain the same. Classic FM Hall of Fame: The Silver Edition holds onto the no. 1 spot, while Einaudi’s Islands climbs two places up to no. 2, swapping places with Michael Giacchino’s soundtrack for Rogue One, which drops two places to no. 4. Meanwhile, Jubilate: 500 Years of Cathedral Music remains at no. 3.

Below the top four, it is all to play for in the Classic FM Chart. No. 5, no. 6 and no. 7 are all new entries, seeing a broad range of music enter the chart - the soundtrack to Quartermass and the Pit, Rime of the Ancient Mariner, and Mstislav Rostropovich’s recording of Shostakovich’s Cello Concerto No. 2. Einaudi continues to have two albums in the top 10 with Elements slipping down two places to no. 6 and Morricone 60 slips down four places to no. 9. This week’s highest climber also features in the top 10, seeing Andrea Bocelli’s Cinema jump a staggering 19 places to no. 10.

This week’s biggest faller was Yo-Yo Ma’s latest album, which entered the chart last week at no. 11, but falls ten places this week to no. 21. Elsewhere in the chart, there are a further five new entries, bringing the total for this week to eight. The Complete CBSO Recordings conducted by Louis Fremaux enters the chart at no. 12; Tyler Bates’s score for Guardians of the Galaxy - Vol 2 enters at no. 19; meanwhile at no. 25 is the London Symphony Orchestra Percussion Ensemble’s recordings of music by Steve Reich; at no. 28 is Vasily Petrenko with the Royal Liverpool Philharmonic Orchestra playing Tchaikovsky’s Symphonies 1, 2 and 5; and finally the eighth new entry this week, Alleluia, enters the chart at no. 30. There is only one reentry this week from Max Richter, making him the second artist with more than one album in the Classic FM Chart this week.