Classic FM Chart: Game of Thrones Season 7 is at no. 1 for the second week 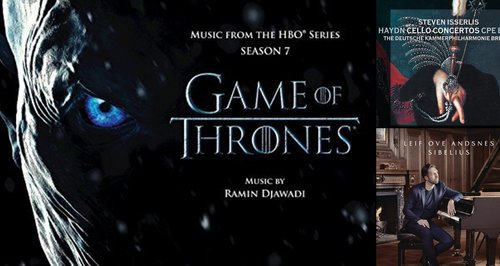 Ramin Djawadi’s soundtrack for Game of Thrones: Season 7 remains at no. 1 in the Classic FM Chart for the second week. Meanwhile, Einaudi’s Islands finally drops down one place to no. 3 after spending more than a month at no. 2. Many of the other albums in the top ten remain the same as last week, with the addition of this week’s highest climber, Classic FM’s own Vivaldi: The Four Seasons, up 9 places from no. 17 to no. 8, and Einaudi’s Elements at no. 10, up six places.

Just outside the top ten, there are two new entries. First of all at no. 11 is Steven Isserlis’s new recordings of Haydn and C.P.E. Bach’s Cello Concertos, and at no. 12 is Leif Ove Andsnes playing Sibelius.

There are a further four new entries in the lower half of the Classic FM Chart this week, including Pavarotti: The Peoples Tenor and Martha Argerich’s Live from Lugano 2016, bringing this week’s total number of new entries to six. Meanwhile, there are three reentries this week - two from Max Richter and finally The City of Prague Philharmonic Orchestra playing The Complete Harry Potter Film Music at no. 30.