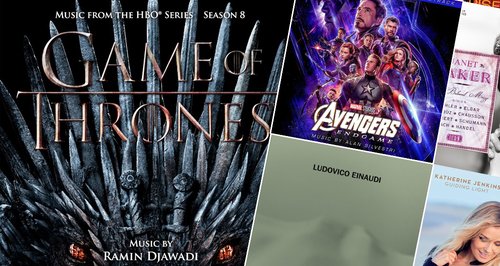 Five new entries diversify this week's chart, with a particular emphasis on Game of Thrones' popularity as the final season comes to an end.

Straight in at No. 1 this week is the newly released soundtrack to the final series of Game of Thrones. Series 8, composed by Ramin Djawadi, sits at the top of the chart, whilst Djawadi's other scores to previous seasons sit at Nos. 7, 11 and 21.

Ludovico Einaudi's latest release in his seven album series, Seven Days Walking – Day Three has entered at No. 5 ahead of three re-entries. The Avengers: Endgame soundtrack by Alan Silvestri re-enters at No. 13, An English Coronation: 1902-1953 at No. 25, and Icon by Janet Baker re-enters at No.28.