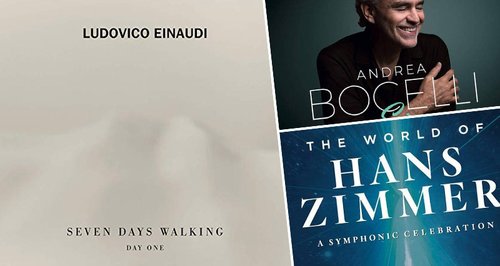 After 20 weeks at No. 1 in the Classic FM Chart Andrea Bocelli has met his match, in the form of fellow musical Italian Ludovico Einaudi

The first installation in Ludovico Einaudi’s new album series has nudged Andrea Bocelli’s Sì off the top spot, after 20 weeks at No. 1.

And the good news doesn’t stop there for the Italian composer-pianist. Einaudi has six other albums in this week's Classic FM Chart, including Islands and In a Time Lapse which both appear in the top 10.

Elsewhere in the chart, The World Of – A Symphonic Celebration is a new entry for German film composer Hans Zimmer at No. 5. Plus, Isabelle Faust’s new recording of Bach’s Violin Concertos, recorded with the Akademie für Alte Musik Berlin orchestra, has entered the chart at No. 13.