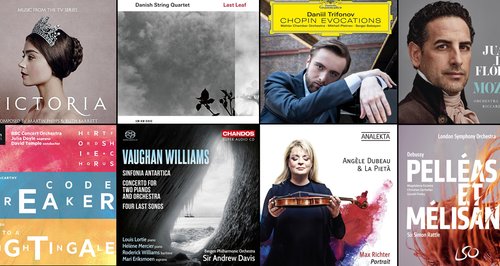 Einaudi’s Islands is back at no. 1, having featured in the top ten of the Classic FM Chart for all of 2017 - a whole 40 weeks. However, there are eight new entries chasing Einaudi’s tail…

No. 2 is our first new entry this week, Martin Phipps and Ruth Barett’s soundtrack for television series Victoria. Symphonic Adiemus by Karl Jenkins, last week’s no. 1, is at no. 3 this week, with a re-entry from Red Priest at no. 4. Alistair McGowan’s The Piano Album is at no. 5, down three places, with two further new entries in the top 10 - Chopin Evocations played by Daniil Trifonov at no. 7 and Simon Rattle conducting the London Symphony Orchestra playing Debussy’s Pelleas et Melisande at no. 10.

Just outside the top 10 is The 50 Greatest Pieces of Classical Music by the London Philharmonic Orchestra, down eight places to no. 11. There are also three further new entries in the middle of the chart - Juan Diego Florez playing Mozart at no. 14, Last Leaf at no. 16 and works by James McCarthy and Will Todd at no. 18.

The lower third of the chart features another two new entries - the first at no. 21 by Angele Dubeau playing the music of Max Richter and Sinfonia Antartica playing Vaughan Williams at no. 28. This week’s biggest faller is Max Richter’s Three Worlds: Music from Woolf Works, down 20 places from no. 9 to no. 29, and the second re-entry this week is Schubert’s Piano Sonatas by Krystian Zimerman at no. 30.