Classic FM Chart: 'Dunkirk' soundtrack stays at no. 1 for the third week in a row 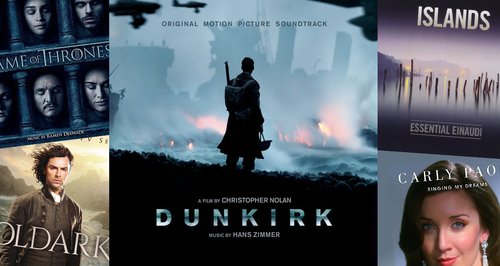 For the third week in a row, both Hans Zimmer's soundtrack for Dunkirk and Einaudi's Islands are non-movers, holding on to the top two spots. Ramin Djawadi's score for Game of Thrones: Season Six continues to rise up the chart, climbing three places to no. 3, and is accompanied by two other big climbers - Carly Paoli's Singing My Dreams is up eighteen places from no. 23 to no. 5, and Anne Dudley's soundtrack for television hit Poldark is this week's highest climber, jumping twenty-four places from no. 30 to no. 6.

There is very little movement in the middle of the chart this week, however, there are several re-entries, including Max Richter's score for The Leftovers, the soundtrack to Pride and Prejudice, Einaudi's Divenire, 40 Most Beautiful Arias and John Wiliams's score for Star Wars: The Force Awakens. There is also one new entry this week - the latest album from Ensemble Marsyas at no. 23. The lower third of the chart also includes this week's biggest fallers - Cipriani Potter's Piano Concertos down twenty-one places from no. 3 to no. 24, and Claire Jones's This Love, down twenty-three places from no. 7 to no. 30 - both new entries straight into the top ten last week.