Classic FM Chart: 'The Glorious Garden' by Alan Titchmarsh and Debbie Wiseman holds its No. 1 position 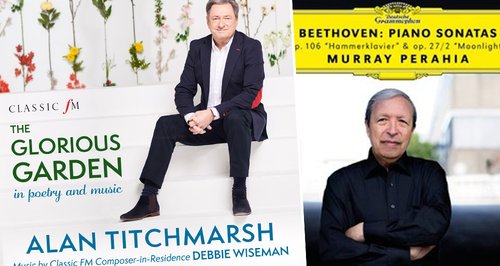 This week in the Classic FM Chart, 'The Glorious Garden' has managed to hold onto its No. 1 spot from last week - and Murray Perahia jumps up 20 places with his Beethoven Piano Sonatas!

The Classic FM Chart sees Alan Titchmarsh and Debbie Wiseman holding the No. 1 spot, with their brand-new album of original poetry and symphonic music. And it's good news for Andre Rieu with his album Amore, which stays strong at No. 2. The only change in this week's top five sees Einaudi's Islands and Sheku Kanneh-Mason's Inspiration switching places at No. 3 and No. 4 respectively.

At No. 6, Murray Perahia has leapt up a huge 20 places with his album of Beethoven Piano Sonatas, while Sing Me Home by Yo-Yo Ma and the Silk Road Ensemble has also leapt up seven places from No. 14 to No. 7.

There are only two new entries this week: Language of the Heart by the Santiago Quartet at No. 9, and The Complete Recitals on Warner Classics by Christa Ludwig at No. 12. However, the bottom end of the chart sees a number of re-entries, including Ramin Djawadi's soundtrack to Game of Thrones Season 7, Karl Jenkins' The Armed Man, and two albums from Ludovico Einaudi.