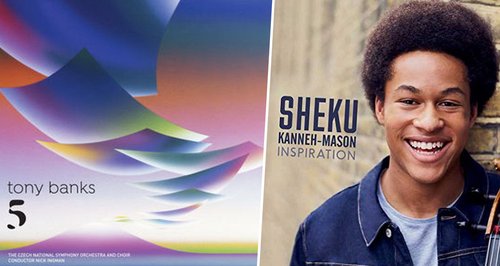 Tony Banks and Nick Ingham enter the Classic FM Chart at No. 1 with 'Five', a classical crossover album recorded with the Czech National Symphony Orchestra.

This week in the Classic FM Chart, we see a brand-new entry at No. 1 with Five by Tony Banks the Czech National Symphony Orchestra conducted by Nick Ingham, pushing Sheku Kanneh-Mason's Inspiration from the top spot. Inspiration is now at No. 2, with Andre Rieu's Amore also falling just one spot to No. 3.

In the lower third of the chart, there's a new entry for Federico Albanese's By The Deep Sea at No. 21, the only other new entry this week alongside the new No. 1, Five. The lowest end of the chart sees five new re-entries: Classical Chillout at No. 25, Einaudi's I Giorni at No. 26, Yo-Yo Ma playing Six Unaccompanied Cello Suites by J.S. Bach at No. 27, plus the Justice League soundtrack at No. 29 and Einaudi's Una Mattina at No. 30.

This adds up to a huge six chart entries for Ludovico Einaudi – two more than his four entries last week.