Classic FM Chart: Einaudi climbs back up to no. 1 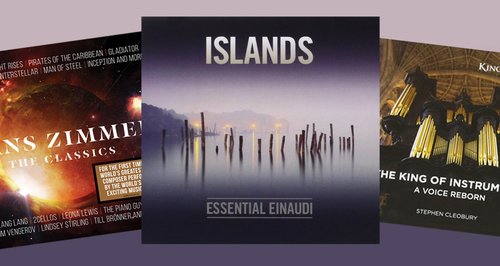 Einaudi’s Islands is back at no. 1, bumping the Wonder Woman soundtrack down to no. 2 after two weeks at no. 1. After a few of the same albums sitting within the top ten, this week there are finally some changes. One loss from the top ten is this week’s biggest faller, Pirates of the Caribbean: Dead Men Tell No Tales, which drops twelve places from no. 8 to no. 20. This week’s top 10 also includes the highest climber from Hans Zimmer: The Classics, which jumps an impressive 25 places from no. 29 to no. 4.

Hans Zimmer’s music has several other appearances in the Classic FM Chart this week, including the soundtrack for Gladiator at six, a new addition to the top ten, as well as Gladiator: Special Anniversary Edition which is a re-entry at no. 22 plus Music of Hans Zimmer at no. 26 - the increase possibly due to his current UK tour.

Other re-entries this week include Max Richter’s Three Worlds: Music from Woolf Works and Recomposed at no. 12 and no. 15 respectively, Monteverdi and Other Vespers at no. 28 and also Mahler Symphony No. 3 at no. 29, bringing the total number of re-entries this week to six. There is only one new entry this week from Stephen Cleobury titled The King of Instruments: A Voice Reborn which enters the chart no. 23.