Classic FM Chart: The Ayoub Sisters enter at no. 2 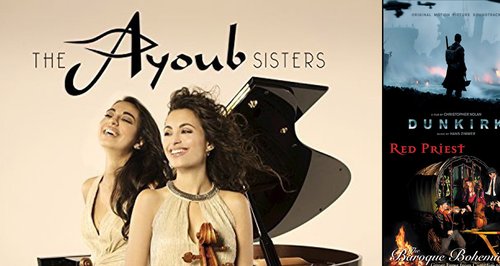 Hans Zimmer’s score for Dunkirk has climbed up eight places to the take the top spot from Jonas Kaufmann. The Ayoub Sisters debut album, a previous Album of the Week, enters at no. 2, while Red Priest’s The Baroque Bohemians: Gypsy Fever from Campfire to Court enters at no. 7.

There are plenty other new entries in the Classic FM Chart this week, including Blessing by Christina Johnston at no. 18, the latest album from Phantasm at no. 21, plus Kol Nidrei Elegy for Pamala at no. 26 and finally Crazy Girl Crazy by Barbara Hannigan at no. 30. There are also two re-entries this week which are both film scores.

This week’s biggest faller is Classic FM: Vivaldi - The Four Seasons and Steven Isserlis’s recent release is the highest climber, up seven places from no. 11 to no. 18.