Formerly one of the best-selling Three Tenors, Placido Domingo unveils his first album of music for the baritone voice. Album of the Week, 5 August 2013.

For the very first time, superstar tenor Placido Domingo has recorded a complete album of baritone repertoire - all of it from the pen of bicentenary birthday boy Giuseppe Verdi.

The album includes Verdi's best-loved baritone arias from La Traviata, Rigoletto and Don Carlo among others, and represents an extraordinary development for a singer who was considered the Verdi TENOR of his generation.

For a 73-year-old, its remarkable that Domingo continues to break new ground in opera, adding three new roles this year to the 139 roles he'd already mastered. His baritone parts have been acclaimed around the world's opera houses and this album gives listeners the chance to hear a voice that is changed but undiminished in its strength, drama and versatility. 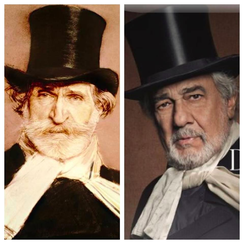