If you thought Vaughan Williams was all Greensleeves and Larks, think again. From his modest personality to his incredible choral music, take a look at why we think Vaughan Williams is worthy of being crowned the greatest composer of all time. He's cool enough to pull off the name Ralph for a start…

1. The Lark Ascending is simply incredible

OK, it's not all about the Lark, but it's a good place to start. It's simple yet virtuosic, it's poetic, it's dramatic: what's not to like? Give this distinctly superior Nicola Benedetti version a listen if you're in need of a refreshing blast of the English countryside.

Yes, you heard correctly. Vaughan Williams is one of only a handful of composers who gave the harmonica a chance as a fully-fledged classical instrument. And we're glad he did too: listen to this and you'll see what we mean.

3. The mind-blowing choral singing in A Sea Symphony

Move over Beethoven, this is a real 'Choral' Symphony. Even if you stop listening after the first 30 seconds (we wouldn't recommend it), Vaughan Williams' epic vocal writing packs a hefty punch. What's more, this is one of the first examples of singers being used throughout the entire piece - it's not just about the finale, you know.

4. He took advice from the best

When it comes to composer companions, Vaughan Williams spent time with some of the best in the business. Whether hobnobbing with Holst or researching with Ravel, this particular English composer made sure he filled his days with the most talented musicians he could, taking lessons from Parry and Bruch, as well as paying tribute to the great English composer Thomas Tallis in this incredible work for strings.

Been to a wedding recently? Chances are you will have heard music by our good friend Ralph; he's responsible for editing the greatest collection of English hymns of the 20th century, the English Hymnal. Including such classics as Come Down, O Love Divine, All Creatures of Our God and King, and Alleluia, Sing to Jesus, he hit the nail on the head when they described the work as 'a collection of the best hymns in the English language'. (Modest, much?)

6. He knew when to step out of the limelight

Actually, despite taking pride in his English Hymnal, RVW was a pretty humble soul. His staggering musical achievements were eventually recognised when he was appointed to the Order of Merit in the King's Birthday Honours of 1935 - but this was only after he'd declined a knighthood some years before.

7. Serenade to Music is nothing short of spine-tingling

"Soft stillness and the night Become the touches of sweet harmony." It's not just the finely crafted Shakespearean text that makes us go weak at the knees - this is Vaughan Williams at his most enchanting. Written for 16 singers and orchestra, this celestial tune is guaranteed to give you goosebumps.

8. It's not just his music that's great

Vaughan Williams could have avoided war service entirely, but felt it was the right thing to do to join the Royal Army Medical Corps. Not only did he put his life on the line to serve his country, but like everything else he did, he put his heart and soul into it - after a nasty illness, he managed to direct a team of soldiers while lying on the ground. He even carried on composing after his hearing was damaged by gunfire. And thank goodness he did. 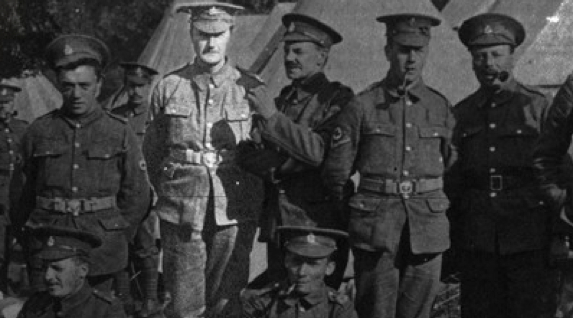