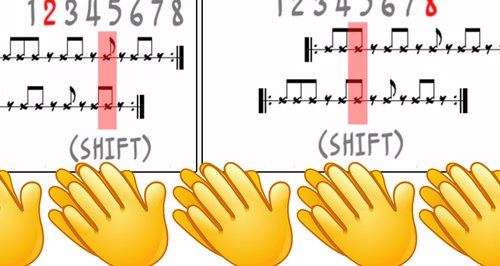 Steve Reich’s seminal percussion work ‘Clapping Music’ has a justified reputation as one of the most influential works of the 20th century. But how does it work?

Reich’s original objective was to create a piece that could be performed by two musicians without instruments, using only their bodies to create the sound.

What looks like a fairly simple musical phrase soon turns into a bit of a headache as performers must gently phase two iterations of the same pattern until they become out of synch, then finally arrive back in perfect unison many repetitions later.

This video, handily put together by YouTuber gerubach, shows the exact relationship between to the two phasing parties:

Make sure you applaud at the end.

Composer Steve Reich on phones in concerts: ‘If you’re not riveted to the music, we’ve failed you’

Steve Reich: ‘In my lifetime, classical music has never been so populated with talented people’

Want to be just like Steve Reich? The composer has this advice for you

This Steve Reich visualisation will melt your musical mind