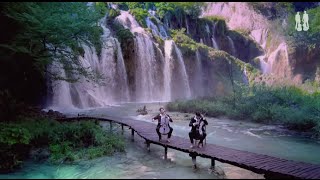 2CELLOS - I Will Wait [OFFICIAL VIDEO]

Viral duo Luka Sulic and Stjepan Hauser take on one of the biggest tunes from the 2010s, in a beautiful video in front of waterfalls in Croatia.

Back in 2014 2Cellos released a single covering 'I Will Wait' from banjo-playing maestros Mumford and Son's 2012 album, Babel. The video, complete with Instagram-style filters, featured footage from the Plitvice Lakes National Park, showcasing the natural beauty of Stjepan's home country of Croatia.

After performing the music, the two barefoot performers take a dip in the water, complete with instruments, and enjoy a stroll over the rocks as their music plays in the background.

The video is just one of a number of viral videos from the duo. Their version of ACDC's Thunderstruck and a later Iron Maiden duet have been amassed tens of millions of views on YouTube.