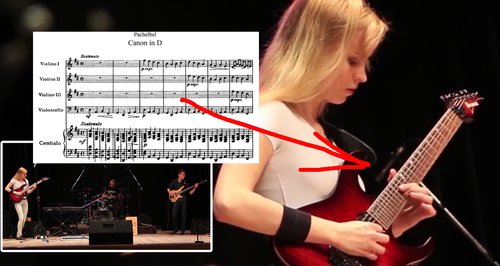 If you’ve always thought Pachelbel’s Canon in D was reserved only for weddings and times of intense tranquility, think again.

We’ve seen the work of guitarist and YouTube star Laura Lāce before, but here we can see her performing live on stage with a full band in her native Latvia. Pachelbel's Canon in D, the bane of cellists everywhere, has always been ripe for reinterpretation (and removing from all wedding ceremonies).

Classic FM is performing Pachelbel's Canon for SIX HOURS for charity. Join us >

Unsurprisingly, the result is fresh and delightful:

And not a million miles away from this:

To mark Global's Make Some Noise Day on October 7th (and hopefully raise lots of money for disadvantaged children), Classic FM and friends will be performing Pachelbel's Canon for SIX HOURS straight.

Find out how you can take part, watch, and donate money >