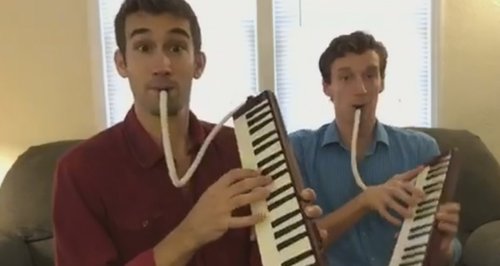 When two friends started playing toy musical instruments in their basement, they didn't expect to become an internationally-acclaimed musical duo.

Firstly, what on earth is a melodica? A melodica, also known as the pianica, is a sort of harmonica-keyboard hybrid where you blow air into it through a mouthpiece and, like an organ, pressing a key opens a hole and creates a note by making the reeds inside vibrate.

Secondly, how did two music graduates go viral playing a toy instrument? While studying at Peabody Conservatory in Baltimore, Tristan Clarke and Joe Buono became friends and began experimenting with toy instruments in their basement. They have been playing melodica together since May 2016 and posted their first Facebook video as Melodica Men in July 2016, which was viewed 3400 times. In less than a year, their videos have grown rapidly in popularity and their version of Stravinsky's Rite of Spring was viewed 1.5 million times on YouTube.

Thirdly, why would you not want to watch Melodica Men's most recent video of them playing the incredibly catchy and upbeat Carmen Fantasy? It's already had over 84,000 views on Facebook in less than 24 hours - check it out below!

And if you enjoyed this video then you should check out our video of Lang Lang playing on our toy piano here at Classic FM.