Aled Jones climbs to No.3 in the UK album chart with ‘One Voice' 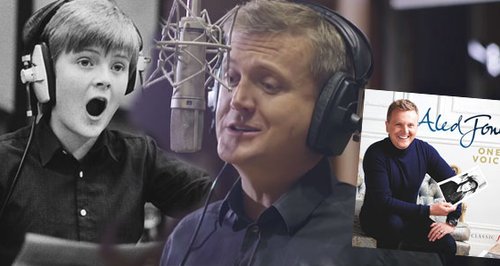 Classic FM presenter improves his UK chart position for a third week in a row, this week beating off competition from Sia and Justin Bieber.

Classic FM's Sunday morning presenter Aled Jones has continued to climb the Top 10 of the Official UK Albums Chart with his unique new album, One Voice, in which he duets with his younger choirboy self.

After entering the chart at No.6 a fortnight ago and climbing to fourth place last week, the album now sits at No.3, making it Aled's highest-charting solo album ever. 'One Voice' is ahead of Sia’s ‘This is Acting’ and Justin Bieber’s ‘Purpose’ and is behind only PJ Harvey’s new record ‘The Hope Six Demolition Project’ and the ever-present ‘25’ from Adele.

One Voice features the last ever recordings of Aled as a boy. They were rediscovered following a chance conversation between Aled and his parents at their home in North Wales.  They revealed there was a never-released tape of his folk song recordings in their airing cupboard, sandwiched in-between old pants and socks to keep it dry.

Buy One Voice and view videos >

“It’s incredible to be spending a third week at the top of the charts. I’m so grateful for the support of all my fans and humbled by the response the record has had so far.” said Aled.

Earlier this month, Aled performed some of the songs from One Voice live for the first time at Classic FM Live at London’s Royal Albert Hall. On 6 May, Aled embarks on a 22-date cathedral tour in which projections of his younger self will join Aled on stage to sing duets from the album.

One Voice, released on 1 April on the Classic FM label, is also No.1 in the classical chart. John Brunning presents the full Top 30 countdown at 5pm on Sunday, on Classic FM.