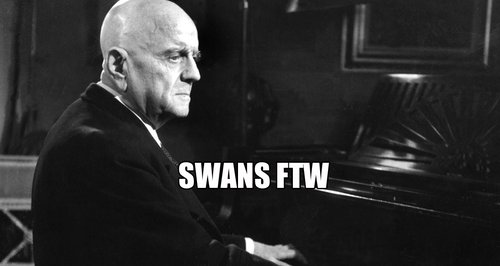 There are swans, there are horns, there is unbridled orchestral ecstasy. We can’t get enough of this movement.

It’s mega swirly at the beginning

As declamatory openings go, it’s not exactly up there. But what it does is establish confusion. The strings flutter, unable to settle, whirring around and answering back.

They climb higher and higher, until finally, like the sun parting the clouds, the brass arrive to put things on an even keel.

This is how Leonard Bernstein feels at the exact moment of their arrival:

After that, it’s basically all about the swans

So, Sibelius wanted to convey the majestic call of the whooper swan for one of the movement’s main themes.

Hmm. So in our heads and probably yours, there’s not a huge amount of symphonic potential there. But this is how Sibelius interpreted it, in these horn chords:

Like, how did he even get that from those swans? And he naturally went for the horn rather than the oboe? He’s a genius. While we’re on the subject of horns…

By separating the final six chords of this movement, and the whole symphony, Sibelius created one of the finest ‘conductor moments’ in classical music. It basically gives the stick-waggler carte blanche to swagger through the ending like a total god.

Few do it justice better than Leonard Bernstein - performing in Croydon’s Fairfield Hall, of all places.

Sibelius: 15 facts about the great composer