Did you know: This Haydn minuet and trio sounds exactly the same played backwards as it does forwards 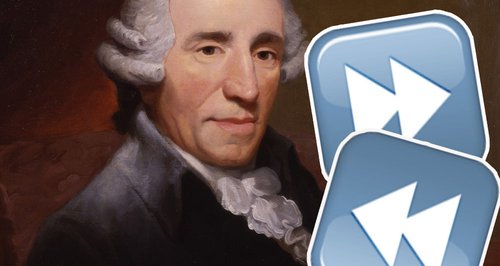 An enterprising YouTuber has shown that the minuet and trio movements from Haydn's Symphony No.47 sound the same backwards and forwards… and it’s pretty awesome

However great a piece of music is, it usually sounds pretty pants when it’s played backwards.

But not Haydn’s Minuet and Trio from his Symphony No.47 – nicknamed ‘The Palindrome’ – because Haydn used a neat bit of musical trickery to create a piece that's perfectly symmetrical.

Haydn wrote a ridiculous number of symphonies – 104 in fact. And we made one member of the team listen to them all.

Here’s why it’s called ‘The Palindrome’

The second part of the Minuet is the same music as the first part – but in reverse. And the same thing happens in the Trio .

Here’s the score of the melody from the minuet to demonstrate:

And just in case you're in any doubt that the piece *is* actually a palindrome, one muso geek on YouTube has actually reversed the audio, just to prove the whole Minuet and Trio is really and truly the same backwards as it is forwards.

First you'll hear the whole Minuet and Trio movement played in reverse, before the real version.

Haydn is known as a bit of a musical trickster – he also wrote the ‘Surprise’ Symphony designed to wake up audience members who chose to doze through his musical creations.

He also wrote the ‘Joke’ string quartet which has a couple of “fake” endings to trick unsuspecting audience members into applauding too early. The cheeky chappy.