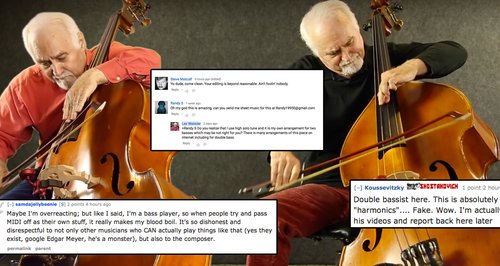 The mystery of whether it's fake or not continues: we've spoken to pro bass players with differing views.

Here's the video we're talking about

Arranged and performed by Lev Weksler, then uploaded in October last year, the video shows Weksler performing the Rimsky-Korsakov classic 'Flight of the Bumblebee' in typical split-screen style. It looks and sounds intensely impressive.

Not everyone thinks it's the real deal

Commenters on YouTube and a thread on Reddit have called the authenticity of the video into question, suggesting that Weksler has programmed MIDI instruments to play the piece and is simply miming along:

As you can see in that last comment from YouTube, Weskler suggests that he is using a higher tuning to achieve the 'cleaner' sound in the upper registers of his instrument.

We've spoken to some pro double bassists, and still we can't decide

Lauren Pierce has weighed in on the debate, telling Classic FM:

“I honestly can't say one way or another if this video is faked or not, but I do have a hard time believing someone would do something like that. I don't know Lev personally, but if you watch his other videos, he's a great player!”

“I will say this: I don’t believe what’s being played in the video is beyond the scope of what the bass is capable of. I think it’s really cool that a lot of people seem to be in genuine disbelief that a bassist could play something like that, when in fact we totally can! I hope this video inspires other bass players to learn this piece and other pieces of comparable difficulty. I know it has definitely inspired me!”

One of the most virtuosic pieces ever composed for violin, played on the double bass... (from Lauren Pierce: http://laurenpiercebass.com)

And an opposing view...

Daniel Tosky, double bassist with the Atlanta Symphony Orchestra, got in touch to say that he absolutely thinks it's a huge fakey fake.

“The audio in these videos is 100% fake and you can quote me on that.

At first I was confused if it was just highly processed and auto-tuned or completely artificial. What is immediately obvious is that he is dubbing to another track, but that in itself is not a sin - Heifetz did this regularly for his video recordings (to his own playing, of course).

It doesn't take more than a few seconds to hear the midi-like quality of the sound and to notice that his bow does not match the sustain and articulation of any of the pitches.

His left hand miming is relatively convincing, because he obviously knows the geography of the instrument and the material is fast enough to obscure things. Slow it down a little bit and it becomes clear that his fingerings do not match the correct pitches. For one example out of many, he will gliss down a string, yet the pitches are going up and down.

I was emailed a link to this video by a friend yesterday, and all the comments pointing out the farce have been deleted by today. I really only take offence that he presents this as his legitimate playing. He denies any editing or auto-tune, which is a generous accusation, considering that it is completely artificial. The whole thing is actually quite humorous."

We have reached out to Lev Weksler for comment.

This conductor just started plain yelling in the middle of Scheherazade

‘Flight of the Bumblebee’ on 101 bottles is totally nuts

Mussorgsky and Co too much of a handful

Flight of the Bumblebee… played on an organ’s pedals

7 insanely fast versions of The Flight of the Bumblebee