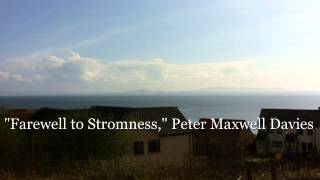 In 2004, the Salford-born composer Peter Maxwell Davies became part of musical history when he accepted the invitation to become Master of the Queen’s Music.

Previous holders of the post include Edward Elgar, John Stanley and Arnold Bax – so ‘Max’, as he is called by all who know him, found himself in illustrious company.

His solo piano work Farewell to Stromness isn’t particularly indicative of his music overall, which is often noticeable both for its visceral sound-world and for its avant-garde structures. But Farewell to Stromness is certainly among his most immediately accessible and most enchantingly simple melodies. Its inspiration is unique in classical music: it was written as a protest against a proposed uranium mine on the remote Orkney Islands where the composer lives. Its first performance was in the summer of 1980 at the St Magnus Festival; the title of the piece refers to the town of Stromness, which would have been just a couple of miles from the centre of the mine should it have been constructed.

Many people were introduced to the piece when it was performed in a string arrangement by members of the Philharmonia Orchestra at the blessing of the marriage of the Prince of Wales and the Duchess of Cornwall at St George’s Chapel, Windsor, in 2005. The Los Angeles Guitar Quartet has also recorded an arrangement of it – but nothing really beats the simple, quietly stated solo piano original, performed by the composer himself.