From The Back Desk - Joseph Conyers, Philadelphia Orchestra 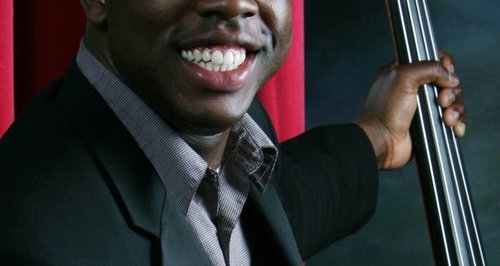 We talk to Joseph Conyers, double bass player with the Philadelphia Orchestra, about engaging the local community, looking like you're concentrating and a squeaky stool...

Why did you decide to become a musician?
Honestly, it was as simple as my mother hearing classical music on the radio as a child; she dreamed her future children would be raised learning to play orchestral instruments. Her inspiration, coupled with my African-American, Baptist, southern gospel musical roots – which gave me an appreciation of the soulful aspects of music making – made music come to life. I knew early on that this type of music making was what I wanted to eat, sleep, and breathe the rest of my life.

What's the one performance from your career that sticks in your mind?
One of the most thrilling musical experiences I remember is performances of Benjamin Britten’s Peter Grimes at Santa Fe Opera.  It was my first introduction to the work – which to me is one of the greats of the 20th century – and all of the elements came together at the time for really memorable performances.

Luckily, being able to play in an orchestra like the Philadelphia Orchestra, stand-out performances occur often. The Philadelphia Orchestra lives and breathes music making, and with the addition of Yannick Nézet-Séguin as our new music director – a conductor who at a young age very much seems to “get it” – I’m looking forward to many more years of glorious concerts and fantastic musicianship from this most esteemed ensemble. Boy was I lucky to win this gig….

What's the most embarrassing thing that's happened to you on stage?
Thankfully, nothing really horrendous has occurred in my relatively young career (and there is plenty of time for that to change). The worst I can think of was when I was sitting assistant principal bass while turning pages for a faculty member at Aspen, and I had a particularly squeaky stool. Of course, I’m turning pages during one the most quiet, suspenseful parts of the music, and tried to gradually sit down with any chord that happen to occur in the music… until finally, there was a subito forte that allowed me to simply “plop” down.  I thought I had done a good job masking this display of sensitivity and precision, only to find out later that the entire bass side of the auditorium was watching me with great amusement!

In concert, have you ever thought, "I can't actually play this bit very well, I'm going to mime and hope no-one notices"?
As a bass player, the storm scene in Beethoven 6th immediately comes to mind. There are a few other licks like that in the repertoire – where I stare at my music, look really involved, and thank the heavens that no one can hear what madness might be actually be coming out of my instrument at that moment…

Could you give us an example of the downside of the profession, something that the average concert-goer might not know about?
I love music so much; I wish everyone in the world could experience the joy of music making – the communal experience of bringing to life the genius of these musical masters.  I’m so appreciative of the audience who comes to hear any concert I’m involved in. Deep down, however, I question how many more people outside of these walls realise the wonderful experience they are missing.  Then I ask myself, “how do we get them in here?”  In many ways, I’ve dedicated my life to answering that question.

Does the touring lifestyle bring out rock star behaviour in the orchestra?
Rock star? Not so much.  I do have to say, when you’re constantly going from airport to airport, bus to bus, hotel to hotel, and train to train, you basically become like family.  I like this feeling of camaraderie when we are on tour because I think it manifests itself on the concert hall stage.

Have you witnessed any serious diva strops in your time as a musician?
Boy, have I heard some AWESOME diva stories, but to date I have not been able to witness anything particularly juicy. I’m at the beginning of my career; I know it’s only a matter of time…

What's the biggest challenge facing musicians like you these days?
The biggest challenge facing musicians these days is proving the relevance of our art form in the 21st Century. Unfortunately, our industry for the most part has focused on solely giving concerts as the way music can function in the world. I’d love to see more of that focus on how music can be used as a tool to build strong communities, encourage, educate, and empower young people, and weave our wonderful art form into the fabric of society – not as an extra, high society or elitist affair. I’m encouraged by programs like the greatly lauded El Sistema that are having a positive effect on the industry today. I encourage all of my colleagues to support these community engagement initiatives wherever they are – it is important for the survival of what we do. The opportunity for our art form to grow has never been better. We as musicians cannot sell ourselves short. People say that we could never become as popular as sports stars or more popular musical artists.  I say, “why on earth not?!”

What's the best thing about being a musician?
Music is a gift. To be able to share that gift with people around the world is a blessing.