The singer died this morning at the age of 55.  He had been receiving treatment at London’s Royal Marsden Hospital for a malignant brain tumour.

The announcement was made via his official Facebook page:

Hvorostovsky cancelled all performances after the tumour seriously affected his sense of balance.  He made a final appearance in a recital at the Russian ambassador’s residence in London, when he sang arias by Borodin, Glinka, Tchaikovsky and Rachmaninov.

Tall, with a shock of prematurely silver hair, Hvorostovsky was lauded around the world, as well as being listed as one of People magazine's 50 most beautiful people – a rarity for a classical musician. Elle magazine described him as the ‘Elvis of opera’.

Born in Siberia on 16 October 1962, Hvorostovsky sang in a heavy metal before making his debut at the Krasnoyarsk Opera House, in Verdi’s Rigoletto. He went on to win First Prize at both the Russian Glinka Competition in 1987 and the Toulouse Singing Competition in 1988.

Hvorostovsky came to international prominence in 1989 when he won the Cardiff Singer of the World competition, controversially beating local favorite Bryn Terfel in the final round.  Hvorostovsky’s performance included Handel's ‘Ombra mai fu’ and an extrat from Verdi's Don Carlos. “I was sure I was going to win until I heard Bryn Terfel sing Wagner - then I was not so sure,” he said at the time.

His operatic debut in the West was also in 1989 at the Nice Opera in The Queen of Spades (1989). He debuted at La Fenice, Venice, as Eugene Onegin, a success that sealed his reputation, and made his American operatic debut with the Lyric Opera of Chicago in La traviata in 1993.

Read more: This performance shows exactly why Hvorostovsky was one of the all-time greats

The baritone went on to sing at virtually every major opera house, including the Met, the Royal Opera House and La Scala Milan. He became especially renowned for his portrayal of Tchaikovsky's Eugene Onegin, a role which The New York Times said he was “born to play.” In recent years his stage repertoire consisted almost entirely of Verdi operas such as Un ballo in maschera, La traviata and Simon Boccanegra.

Here's Hvorostovsky at New York's Metropolitan Opera, in the role he made his own.

Desperately sad that @Hvorostovsky is no longer with us. His beautiful silken voice will always be heart- wrenchingly gorgeous. https://t.co/Dtgy2Je8jE

Tragic news. Dmitri Hvorostovsky was an astonishing singer, a warm & charismatic man and one of my first operatic heroes.

Today I have that feeling, the same feeling I got when I heard of Pavarotti’s passing. That sombre feeling. Opera Stars bigger than life itself, and this time, @Hvorostovsky. Rest In Peace. #OperaWorld

Gutted to the bone. A charming singer with a greatness that will immortalize his artistry. #hvorostovsky... https://t.co/kWoGrmpDeb 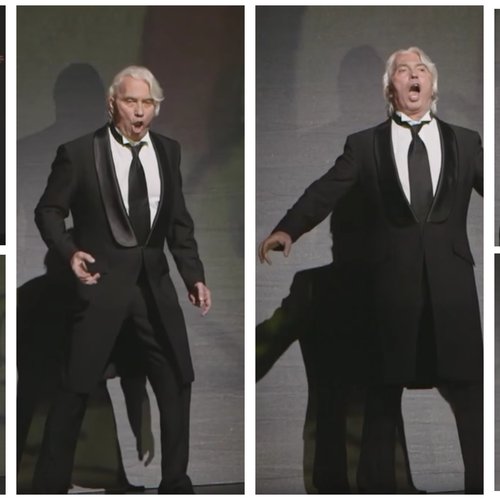 Six months ago, while battling a brain tumour, Dmitri Hvorostovsky belted out this incredible Verdi