Classic FM Chart: 'Wonder Woman' climbs up to No. 1 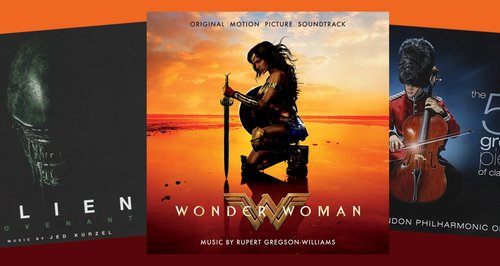 Rupert Gregson Williams’ soundtrack for Wonder Woman has climbed up five places to reach the top spot. This week’s top ten also includes the highest climber - 50 Greatest Pieces of Classical Music by the London Philharmonic Orchestra - rising seven places from no. 10 to no. 3, making it’s 300th appearance in the Classic FM Chart. The rest of the top ten is made up of the same albums as last week, with the addition of Jed Kurzel’s soundtrack for Alien: Covenant joining the top ten as a new entry at no. 6.

Elsewhere in the chart, there are three other new entries, including the new album from Steven Osbourne, Ludovico Morlot and BBC Scottish Symphony Orchestra at no. 12; Wagner: Parsifal with Mark Elder and the Hallé Orchestra at no. 24; and Sam Haywood’s new album enters the chart at no. 28. There are also two re-entries - Max Richter’s score for TV series The Leftovers: Season 1 at no. 26 and Hans Zimmer’s score for Batman vs Superman: Dawn of Justice at no. 29. Meanwhile, the biggest faller is Rami’s My Journey, dropping nineteen places from no. 11 to no. 30.