Classic FM Chart: New soundtracks for Pirates of the Caribbean and Wonder Woman enter the chart in the top 10 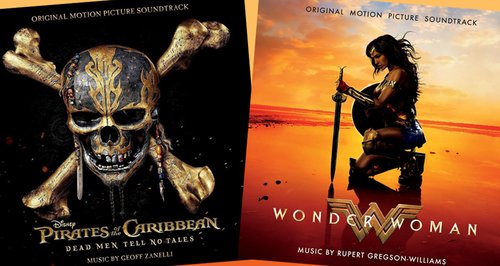 Two out of three new entries this week land into the Classic FM Chart in the top 10. Geoff Zanelli’s soundtrack for the latest film in the Pirates of the Caribbean franchise enters the chart at no. 2, while Rupert Gregson Williams’ score for Women Woman enters the chart at no. 6. Peaceful Piano manages to hold onto the top spot for the fourth week, meanwhile this week’s highest climber, Love in Venice by Andre Rieu jumps a massive 19 places from no. 23 to no. 4.

In the rest of the chart there are 3 re-entries and 1 other new entry. Hans Zimmer’s soundtrack for Pirates of the Caribbean: At World’s End reenters the chart at no. 16 alongside Hans Zimmer: The Classics at no. 30, making them the 10th and 11th soundtrack based albums in this week’s Classic FM Chart. The final reentry comes from Andrea Bocelli’s Cinema at no. 25 and the third new entry is from Isabelle Faust and Alexander Melnikov at no. 28.