Classic FM Chart: Spiderman: Homecoming enters the chart and goes straight to no. 1 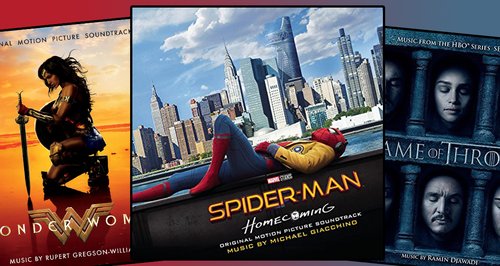 Michael Giacchino's soundtrack for Spiderman: Homecoming has entered the Classic FM Chart straight at no. 1, pushing Einaudi's Islands down to no. 2. Carly Paoli is a non-mover this week at no. 3, while the soundtrack to Wonder Woman drops five places from no. 2 to no. 7. Ramin Djawadi's soundtrack to Game of Thrones: Season 6 continues to climb up the Classic FM Chart in anticipation of the new season starting tonight, and this evening the soundtrack climbs back just inside the top 10. The top 10 also features re-entries from Max Richter's Three Worlds: Music from Woolf Works at no. 6 and 40 Most Beautiful Arias at no. 10.

There is a further four new entries in the middle of the chart, including Poulenc with the Sixteen at no. 12, Elgar conducted by Daniel Barenboim at no. 14, Behind the Counter by Max Richter at no. 20 and Peter Gregson's One at no. 21. Meanwhile, there are three other re-entries, including The 40 Most Beautiful Classical Masterpieces at no. 13, plus Max Richter's soundtrack to season one of The Leftovers at no. 22 and his album Sleep at no. 26.

This week’s biggest faller is hotly contested between Kathleen Ferrier's Remembered which is down thirteen places, Love in Venice which drops twelve places and Craig Ogden's Summertime Deluxe falling eleven places, meanwhile for the second week in a row there isn’t a stand out highest climber in the Classic FM Chart.