Classic FM Chart: Jubilate spends its second week at no. 1 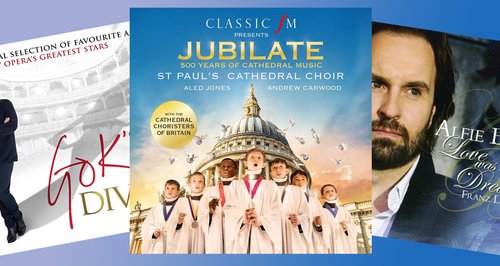 2nd April: 'Jubilate: 500 Years Of Cathedral Music' by St Pauls Cathedral Choir and Guests is at no. 1 for the second week in a row after entering straight into the top spot last week

At the top end of the Classic FM Chart this week, Jubilate: 500 Years of Cathedral Music and Alfie Boe's Love Was A Dream both stay at no. 1 and no. 2 respectively. The rest of the top 5 - Gok's Divas, Einaudi's Islands and Score by 2Cellos - remain the same, but reshuffle.

There are two surprises regarding the rest of the top 10, involving two albums of film music almost completely swapping places at either end of the chart. The biggest faller this week is John Williams and Steven Spielberg: The Ultimate Collection, which was a new entry at no. 6 last week, but drops 22 places down to no. 28 this week. Taking its place is this week's biggest climber - the soundtrack for Rogue One - which jumped 19 places from no. 25 to no. 6.

In the rest of the Classic FM Chart, there are several re-entries and one new entry. Re-entries include two more film composer compilations - which is perhaps the cause of the John Williams and Steven Spielberg: The Ultimate Collection album dropping so far down the chart - Morricone at 60 and Zimmer: The Classics - as well as the soundtrack for Logan, 40 Most Beautiful Classical Masterpieces, Island Songs by Olafur Arnalds, 40 Most Beautiful Arias, Bach: Six Unaccompanied Cello Suits performed by Yo-Yo Ma and Stabat Mater recorded by The Sixteen. The only new entry this week is the soundtrack to the new Power Rangers film composed by Brian Tyler.