Classic FM Chart: Jóhann Jóhansson, who passed away last week, has two entries in the chart 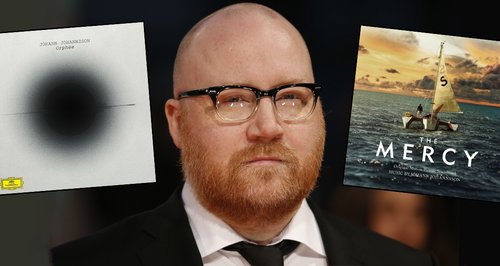 Jóhann Jóhannsson, the Oscar-nominated Icelandic composer of movie soundtracks including The Theory Of Everything, Arrival and Sicario, who was found dead in his apartment in Berlin last weekend, has two entries in the Classic FM Chart. The first is a re-entry of his album Orphee at no. 5, and his most recent work, the soundtrack for The Mercy, enters the chart at no. 26.

In the rest of the chart, Andre Rieu’s Amore steals the no. 1 spot from Sheku Kanneh-Mason, who falls to no. 2. Jonny Greenwood’s score for Phantom Thread is at no. 3 this week, this week’s biggest climber having risen seven places, meanwhile Islands is a non-mover at no. 4. Music for Mindfulness holds onto its place within the top ten at no. 6, while Outlander: Season 3 and Murray Perahia playing Beethoven’s Piano Sonatas both enter the Classic FM Chart at no. 7 and no. 8 respectively. Finally, the soundtrack for The Little Mermaid climbs four places back into the top ten at no. 9, while Stravinsky: The Rite of Spring featuring Marc-André Hamelin and Leif One Andsnes falls four places to just inside the top ten.

In the middle of the chart, there is a singular re-entry from Danny Elfman with his soundtrack to Justice League and a handful of large fallers, including Joseph Calleja singing Verdi and Arangelo performing Bach Magnificats. In the lower third of the chart, Oliver Davis’s Liberty also enters at no. 23, bringing this week’s total of new entries to six. Finally, Star Wars: The Force Awakens re-enters the chart at no. 29, and for the second week in a row, no. 30 is home to the biggest faller - this week it’s Steve Reich down twenty-three places from no. 7.