Classic FM Chart: Hans Zimmer's 'The Classics' enters the chart straight at no. 1 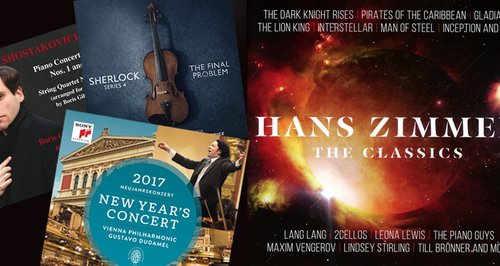 22nd January: Hans Zimmer's 'The Classics' enters the chart at no. 1; the Vienna Philharmonic led by Gustavo Dudamel jump a staggering twenty-six places to climb inside the top five; plus new entries from David Arnold with his score for 'Sherlock: The Final Problem' and the Royal Liverpool Philharmonic Orchestra

The indisputable highlight of this week's chart is the latest release from world-renowned film and television composer, Hans Zimmer. His new album 'The Classics', which features artists such as Lang Lang, Maxim Vengerov, 2CELLOS, Lindsey Stirling, Till Brönner, Amy Dickson and many more, unsurprisingly jumped straight to number one this week.

The rest of the top five remains the same with the addition of the 'New Years Concert 2017' by the Vienna Philharmonic and Gustavo Dudamel, which entered the chart last week at number twenty-six, but has since been featured as Album of the Week for two weeks in a row on Classic FM by John Suchet then David Mellor and has now climbed to number four in the Classic FM Chart.

Elsewhere in the chart there are also new entries from David Arnold with his soundtrack to the latest series of the BBC crime-drama series Sherlock as well as Vasily Petrenko leading the Royal Liverpool Philharmonic Orchestra with Shostakovich's piano concertos.