Classic FM Chart: 'Classic FM Hall of Fame: The Silver Edition' enters the chart at no. 1 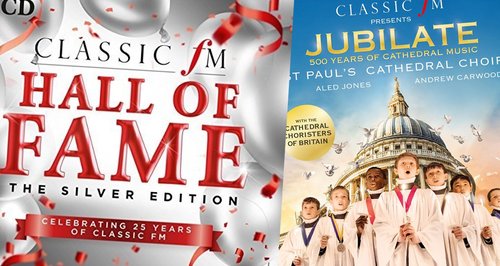 23rd April 2017: 'Classic FM Hall of Fame: The Silver Edition' goes straight to no. 1, knocking 'Jubilate: 500 Years of Cathedral Music' off the top spot after one month

Keeping with the Hall of Fame theme, Classic FM’s new release Classic FM Hall of Fame: The Silver Edition, celebrating Classic FM’s 25th birthday this year, goes straight to no. 1. Previous no. 1 for the last month, Jubilate: Celebrating 500 Years of Cathedral Music, drops two places to no 3, with Michael Giacchino’s soundtrack for Rogue One steps up one place to no. 2. Other albums in the top 10 include two albums for Ludovico Einaudi - Islands and Elements - as well as soundtrack albums from Lord of the Rings and Morricone at 60.

Elsewhere in the chart, there are five new entries and three new entries. There are new entries from Yo-Yo Ma at no. 11, the soundtrack for Broadchurch: The Final Chapter at no. 14 and the 30th Anniversary Collection at no. 18, as well as Min Kym’s Gone at no. 28 and Daniel Hope’s For Seasons at no. 30.