Classic FM Chart: Gok's Divas enters the chart at no. 1 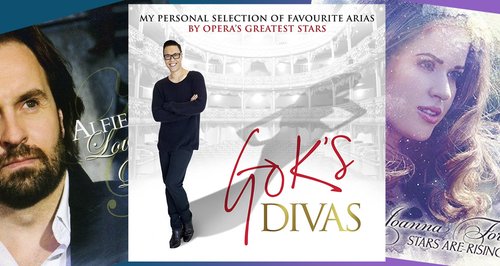 19th March: Gok's Divas enters the chart at no. 1, closely followed by another new entry at no. 2 from Joanna Forest

Gok’s Divas, John Suchet's Album of the Week, is this week's new no. 1. Not far behind, is the latest release from Joanna Forest, Stars are Rising, at no. 2. Alfie Boe's Love was a Dream, last week's no. 1, steps down into no. 3, and with all the excitement at the top end of the chart, there isn't much movement in the rest of the top 10.

There is a total of 10 new additions to the Classic FM Chart, a fantastic amount for the second week in a row. There is a re-entry from saxophonist Amy Dickson at no. 13, who previously entered the chart last month at no. 5, plus new entries from pianist Grigory Sokolov, tenor Mario Lanza, plus a particular favourite - the new video game soundtrack for Horizon Zero Dawn - which sold 2.6 million copies of the game in it's first two weeks.

Elsewhere in the chart, there is very little movement this week, excluding the new entries. The biggest fallers are from tracks which have now left the top 30 such as last week's no 3, A New Heaven by Queen's College Oxford. The highest climber was Cinema, up five places.