Classic FM Chart: Game of Thrones Season 7 soundtrack enters the chart at no. 1 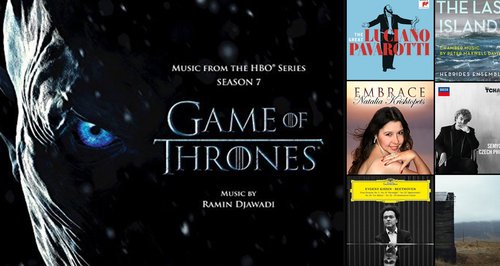 Last week we were busy counting down the biggest selling albums of the last 25 years in the Ultimate Classic FM Chart, so it’s been two weeks since our last regular Classic FM Chart. In those two weeks, there has been plenty of movement plus lots of new entries…

The soundtrack for Game of Thrones - Season 7 by Ramin Djawadi enters the Classic FM Chart straight at no. 1, knocking fellow soundtrack Dunkirk off the top of the chart after over a month. Einaudi’s Islands continues to hold strong onto no. 2, meanwhile Eulogy for Evolution 2017 by Olafur Arnalds enters the chart at no. 3. This week’s highest climber is The Ultimate Last Night of the Proms at no. 4, up fifteen places, with Hans Zimmer’s score for Dunkirk at no. 5 and Game of Thrones - Season 6 at no. 6. No. 7 is another new entry, this time a vocal album titled Embrace by Natalia Krishtopets, while the rest of the top ten consists of re-entries for three Classic FM Full Works albums.

In the rest of the chart, there are lots of further new entries and re entries. Isabelle Faust playing Mendelssohn, a recent John Suchet Album of the Week, enters the chart at no.12, meanwhile Semyon Bychkov conducting Tchaikovsky’s Manfred Symphony enters the chart at no. 21, Evgeny Kissin’s latest Beethoven album enters at no. 24, The Great Luciano Pavarotti enters at no. 25 and eighth new entry this week, The Hebrides Ensemble playing Maxwell-Davis’ The Last Island, enters the Classic FM Chart at no. 30. Meanwhile, there are also three more re-entries, bringing this week’s total to six.