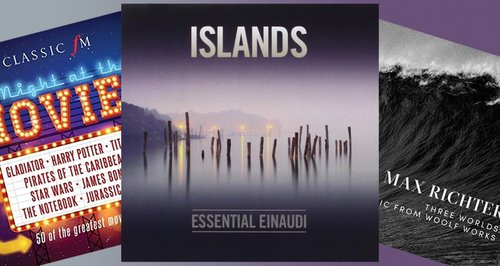 26th February: Einaudi's album Islands finally breaks from it's three week run at no. 2, to take the top spot from Max Richter.

Max Richter's latest album Three Worlds: Music from Woolf Works entered the chart three weeks ago at no. 1. Since then, it has held onto the top spot every week, with close competition from Einaudi and The Classical Album. However, this week Einaudi's Islands broke it's three week curse at no. 2 and switched places with Max Richter to take the no. 1 spot.

The rest of the top 10 stays mostly the same this week, but includes this week's highest climber - Dustin O'Halloran's score for the award winning film Lion, which rises eight places from no. 15 to no. 7. There is also not a great deal of excitement in the top 20 this week, which just includes plenty of reshuffling.

Outside the ongoing battle in the top 3, most of this week's chart action takes place in the lower third where there is only one new entry - Elgar: For the Fallen by the Hallé Orchestra and Choir - and six new entries, including Hans Zimmer's score for Inception, Einaudi's Divenire, the soundtrack to The Crown composed by Rupert Gregson-Williams, the Planet Earth II soundtrack by Hans Zimmer, as well as Karl Jenkins' The Armed Man and the score for Star Wars: A New Hope by John Williams.