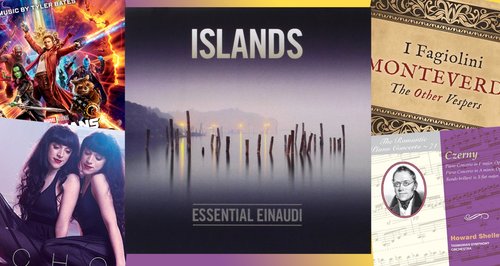 Einaudi’s Islands finally steps up to no. 1 after spending several weeks in the top 10. Meanwhile, Classic FM Hall of Fame: The Silver Edition drops down one place to no. 2 for its third week in the chart, after spending its first two weeks at no. 1. The top 10 also includes this week’s highest climber - Tyler Bates’ soundtrack for Guardians of the Galaxy: Volume 2 - which entered the chart last week at no. 19, but this week climbs 15 places up to no. 4. Other highlights from the top 10 include three new entries, ranging from Monteverdi to Carl Czerny to the latest album from Classical Reflection. There is also a reentry from Olafur Arnalds with his score for Broadchurch: The Final Chapter.

There is plenty of other movement in the rest of the chart, including several large climbers and fallers. This week’s biggest faller is last week’s highest climber - Andrea Boccelli’s Cinema - which falls 13 places down to no. 23. Adding to the reentry from Broadchurch: The Final Chapter, there are five further reentries, including two reentries from Einaudi, making his total number of albums in the this week’s Classic FM Chart increase to four!