Classic FM Chart: Einaudi stays at no. 1 alongside new entry from Beatrice Rana at no 2. 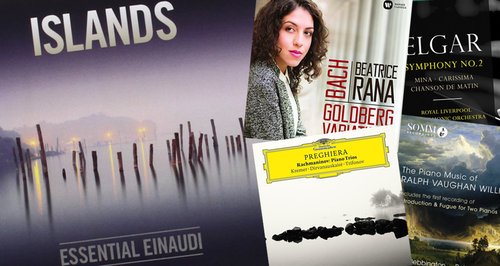 Sunday 5th March: Ludovico Einaudi's 'Islands' stays at no. 1, and after countless weeks in the Top 30 we say goodbye to 'One Voice'

Ludovico Einaudi's Islands stays at no. 1 for the second week in a row, meanwhile Max Richter's former no. 1 album Three Worlds: Music from Woolf Works drops to no. 3 to make way for a new album entering at no. 2 - pianist Beatrice Rana's Bach: Goldberg Variations.

Hans Zimmer's The Classics is this week's no. 4 and also the highest climber, jumping 16 places. Meanwhile, the rest of the top 10 features the same albums as last week's chart.

Elsewhere in the chart, the biggest faller is the soundtrack for Star Wars: The Force Awakens composed by the mighty John Williams, which drops 10 places from no. 14 to no. 24.

Other new entries include Preghiera: Rachmaninov Piano Trios at no. 14, The Piano Music of Vaughan Williams by Mark Bebbington and Rebecca Omordia at no. 17 and Elgar: Symphony No. 2 from Vasily Petrenko with the Royal Liverpool Philharmonic Orchestra at no. 18. There are also many reentries this week, including James Horner's soundtrack for Braveheart, A Year of Songs from Classic FM Presenter Alexander Armstrong and 100 Relaxing Classics, all featuring in the lower third of the chart.

And finally this week, after countless weeks back inside the top 30, we finally say goodbye to former no. 1 from Classic FM Presenter Aled Jones, One Voice.