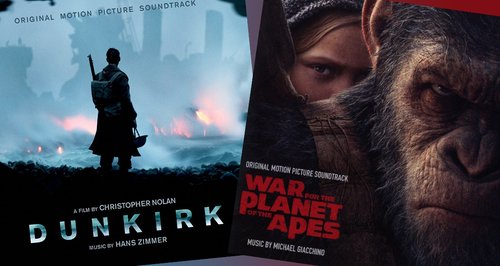 Hans Zimmer’s soundtrack for the highly anticipated film Dunkirk has gone straight to no. 1 in the Classic FM Chart. Recently, Classic FM’s Saturday Night at the Movies presenter Andrew Collins spoke to director Christopher Nolan about his collaborations with Hans Zimmer, including the soundtrack to Dunkirk - you can read more here. Meanwhile, Einaudi’s Islands is still holding on to the second place. This week’s no. 3 is also this week’s biggest climber - Michael Giacchino’s soundtrack for War for the Planet of the Apes - up twenty-five places from no. 28. Last week’s no. 1, a re-entry for Jonathan Antoine with Believe, is down five places this week to no. 6. There is also another new addition to the top ten from Hans Zimmer - his score for Gladiator, which has been slowly climbing back up the Classic FM Chart for several weeks, is this week’s no. 9.