Classic FM Chart: The Classical Album is back at No.1, while Hans Zimmer drops ten places 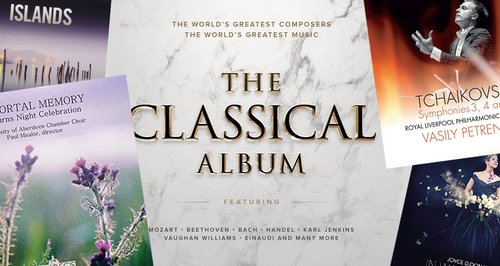 29th January:29th January: The Classical Album jumps back up to no. 1, while last week's No.1 from Hans Zimmer plummets ten places.

The Classical Album, which has stayed within the top two spots since it re-entered the chart two weeks ago, has returned to No.1. Last week, Hans Zimmer's The Classics entered the chart straight into first place, however in its second week it has dropped a huge ten places to No.11.

Other highlights from this week's chart include two new entries in the top ten. The new album from Paul Mealor and the University of Aberdeen Chamber Choir, Immortal Memory – A Burns Night Celebration, joined the chart at No.4, while Vasily Petrenko conducting Tchaikovsky: Symphonies 3, 4 & 6 with the Royal Liverpool Philharmonic Orchestra entered the chart at No.6.

Elsewhere in the chart, the Vienna Philharmonic Orchestra and Gustavo Dudamel's New Year's Concert 2017 has fallen fourteen places from within the top five to No.18, and is overtaken by this week's highest climber, The Lost Songs of St Kilda, which climbed thirteen places.