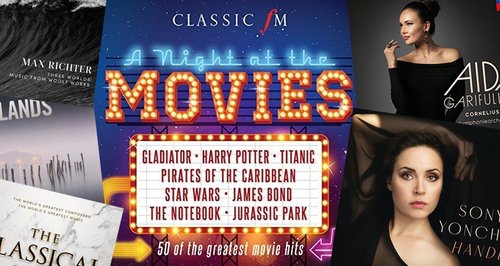 12th February: The top three albums in the Classic FM Chart all stay in the same places this week, plus new entries from Aida Garifullina and Sonya Yoncheva.

Max Richter's new album Three Worlds, which entered the chart last week straight at no. 1, has stayed in the top spot this week. Both Einaudi's Islands and The Classical Album are also non-movers this week, meaning the top three stays exactly the same.

The highlight of this week's chart is Classic FM's own A Night at the Movies, which is this week's highest climber jumping a staggering 19 places up to no. 11, possibly due to the Oscars season drawing to a close.

This week's biggest faller is Jonathan Antoine's Believe, which drops 20 places from no. 4 to no. 24. However, this was a re-entry last week.

There are only two new entries this week, both sopranos and both arriving into the lower end of the chart. Sonya Yoncheva's new album Handel enters the chart at no. 26 and Aida Garifullina's latest album, which includes this extremely glamorous music video, is at no. 29.

Six out of seven re-entries this week are film and television soundtracks, with appearances from Lord of the Rings, The Little Mermaid, Planet Earth II, Gladiator, Star Wars: A New Hope, Star Wars: The Empire Strikes Back, and the only non-soundtrack is The Lost Songs of St Kilda by Trevor Morrison and the Scottish Festival Orchestra.