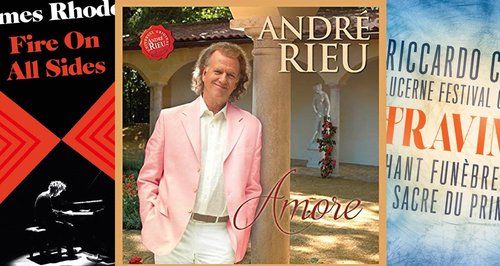 The top four of the Classic FM Chart - André Rieu’s Amore, Music for Mindfulness, Einaudi’s Islands and Star Wars: The Last Jedi - are all non-movers this week, meaning André Rieu secures his sixth consecutive week at no. 1 in the chart. James Rhodes enters the chart at no. 5 this week with Fire on all Sides, closely followed by Riccardo Chailly conducting Stravinksky. Magic of the Violin, another album by André Rieu, is also a non-mover at no. 7, while Howard Shore’s soundtrack for Lord of the Rings is the first mover this week, up two places to no. 8. The 50 Greatest Pieces of Classical Music falls four places from no. 5 to no. 9 and finally Einaudi’s second album in the top ten, Elements, also climbs two places from no. 12 to no. 10.

Just outside the top ten, New Year’s Concert 2018 with the Vienna Philharmonic Orchestra and Riccardo Muti is out highest climber, up twelve places from no. 23 to no. 11. Meanwhile, John Williams’s score for The Post is the third new entry of the week at no. 17. No. 20 is yet another non mover - Hans Zimmer’s score for Gladiator - and this week’s biggest fallers are at no. 25, In A Winter Light, and no 27. Hans Zimmer’s score for Dunkirk, down eighteen and nineteen places respectively. Finally, there are only two re-entries this week and both are at the lower end of the chart - first of all Score by 2Cellos at no. 28 and Tippett Symphonies at no. 30.