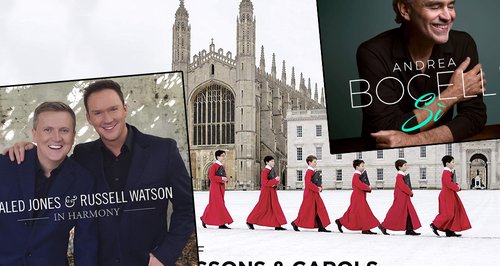 Carols and choirs dominate the chart this week, with only a few weeks to go until Christmas.

The top four places in the chart remain the same this week. Andrea Bocelli is still at No. 1 with Sì, In Harmony is at No. 2, The Ultimate Classical Collection is at No. 3 and Bryn Terfel stays at No. 4 with his new solo album Dreams and Songs.

Now, nine Christmas albums occupy the chart, three of which come from The Choir of King's College Cambridge. Other festive highlights include André Rieu's Best of Christmas album at No. 8, the Home Alone soundtrack by John Williams at No. 15, and The Nation's Favourite Carols at No. 16.

A new solo album of opera arias by Cecilia Bartoli titled Antonio Vivaldi has entered the chart at No. 11 – quite an achievement considering the number of Christmas albums rising up the chart.