Classic FM Chart: Bocelli is back, and Disney takes a lead 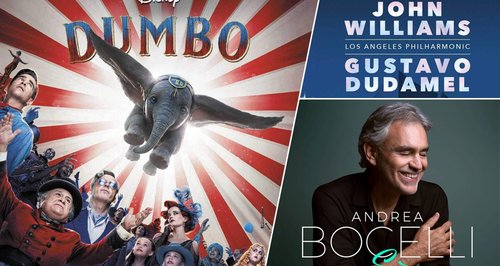 After a significant chart re-shuffle last week, Andrea Bocelli has re-claimed his No. 1 spot.

After a brief fall from the prized No. 1 spot, Andrea Bocelli's album Sì has made its way back to the top of the chart this week. Lang Lang's latest album Piano Book remains at No. 2, while Einaudi's Seven Days Walking – Day One rises from No. 4 to No. 3.

Two new releases have made it on to the chart this week; both from the world of film. In at No. 7 is Danny Elfman's soundtrack to the new live-action remake of Dumbo, while a concert recording of Gustavo Dudamel and the Los Angeles Philharmonic, Celebrating John Williams, enters at No. 25.

Ramin Djawadi's two soundtracks to Season 6 and 7 of Game of Thrones are now climbing up the chart (at No. 13 and No. 24 respectively) in anticipation of the final series airing this week.