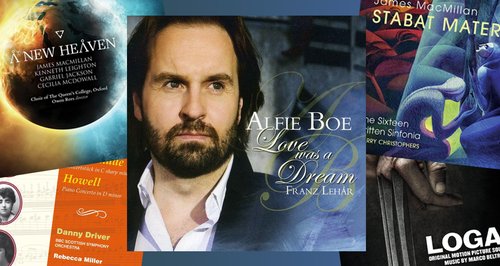 Sunday 12th March: There is a new no. 1 this week - a reentry from Alfie Boe - alongside a staggering seven new entries.

There is a new no. 1 this week in the Classic FM Chart. Alfie Boe's Love Was A Dream re-entered the chart this week straight at no. 1, knocking Einaudi, who had been no. 1 for two consecutive weeks, to no. 2.

There are further highlights in the top 5 and top 10 this week - no. 3 features a new entry from Queen's College Oxford with A New Heaven and no. 4 is the latest album from The Sixteen, also a new entry. All of these new entries push long-time previous no. 1, Max Richter's Three Worlds: Music from Woolf Works, down to no. 5.

Elsewhere in the top 10, there is a new entry at no. 6 - Beach, Chaminade, Howell: Piano Concertos from the BBC Scottish Symphony Orchestra - which is closely followed by a reentry from Max Richter's Recomposed at no. 7, bringing him back to two in the top 10.

In the rest of the Classic FM Chart, the highest climber (apart from Alfie Boe's reentry into no. 1) comes from Cinema by Andrea Bocelli, which jumps from no. 47 up to no. 11, a massive 36 places. The biggest faller is last week's no. 2, Beatrice Rana's Bach: Goldberg Variations, which is now out of the chart, and biggest faller still within the chart is Hans Zimmer's Classics which has been on a rollercoaster for several weeks now, dropping 23 places.

Finally, there are four more new entries in the Classic FM Chart, including albums from the soundtrack to latest Marvel film Logan and BBC National Orchestra of Wales.