Classic FM Chart: Aled Jones and Russell Watson soar to No. 1 with duet album ‘Back in Harmony’ 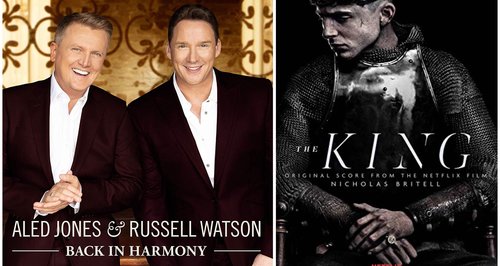 Aled Jones and Russell Watson soar straight to No. 1 with their new duet album ‘Back in Harmony’, and the original score to the new Netflix movie 'The King' enters the chart.

This week, Classic FM presenter Aled Jones dominates the chart alongside Russell Watson, with their new album Back in Harmony – which enters the chart at No. 1. The new release is a follow-up to their debut duet album In Harmony, which sits just behind this new release at No. 2.

Further down the chart, Aled Jones also holds another position at No. 24 with his album You Raise Me Up: The Best of Aled Jones, which re-enters the chart.

There are multiple new entries this week, including Josquin des Prés: Missa mater Patris & Noel Bauldeweyn: Missa Da pacem by The Tallis Scholars; the original score to the new Netflix movie The King by Nicholas Britell; Beethoven 2020 - The New Complete Edition and Christmas from The Gesualdo Six.