Classic FM Chart: Aled Jones’s ‘One Voice: Believe’ stays at no. 1 for a second week 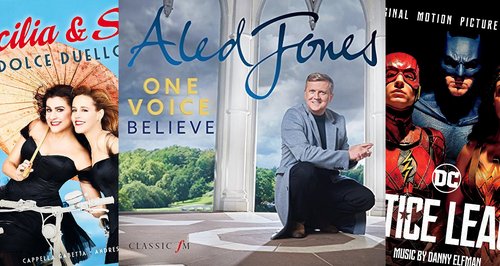 One Voice: Believe holds on to the no. 1 spot in the Classic FM Chart for the second week, after entering the chart straight into the top spot last week. Meanwhile, Einaudi’s Islands clinches onto its position at no. 2.

The Ayoub Sisters and the soundtrack for Blue Planet are pushed off the no. 3 and no. 4 spots by two new entries - Dolce Duello by Cecilia Bartoli and Sol Gabetta, and Danny Elfman’s soundtrack for Justice League respectively. As we edge closer to December, Andre Rieu’s Best of Christmas climbs up the chart five places to no. 6 and there is a further new entry from Patrick Doyle with his soundtrack to the remake of Agatha Christie’s Murder on the Orient Express.

Just outside the top ten there is the first of two re-entries this week - Gareth Malone’s Great British Christmas. No. 18 is our fifth new entry of the week - Bournemouth Symphony Orchestra playing George Dyson’s Choral Symphony - and no. 19 is our second re-entry, Einaudi’s Divenire.

The lower third of the chart includes our sixth and final new entry this week, The Film Scores and Original Music of George Martin at no. 24 as well as this week’s biggest faller - Alexander Armstrong’s recording of Peter and the Wolf, down 16 places.