Classic FM Chart: 'One Voice: Believe' by Aled Jones enters the chart at no. 1 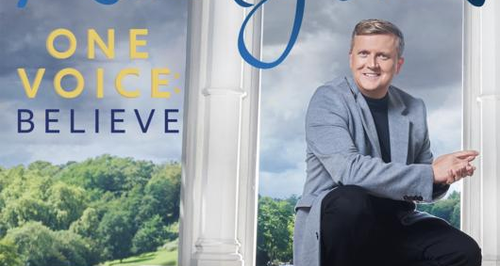 The final album in Aled Jones’s One Voice album trilogy, One Voice: Believe, has entered The Classic FM Chart at No. 1!

The Classic FM Chart sees a brand-new album take the top spot this week: Aled Jones’s One Voice: Believe. With One Voice also re-entering the chart at no. 21 and One Voice at Christmas sitting comfortably at no. 7, all three of the albums from the One Voice trilogy currently feature in the Classic FM Chart.

The top ten also features a re-entry for The Ayoub Sisters back at no. 3 plus this week's highest climber - Andre Rieu's December Lights - up twenty-four place from no. 29 to no. 5. It's also proving to be Andre Rieu's week, as his Best of Christmas album also enters the chart just outside the top ten at no. 11.

There are further re-entries this week in the lower end of the chart from King's College Cambridge choir at no. 18, plus Classical Voices at no. 27 and Karl Jenkins's The Armed Man: A Mass for Peace at no. 29. This week’s biggest faller is The Very Best of Jacqueline du Pré, which falls nineteen places to no. 7 to no. 26.